Cairo is a 24-hour city. On this night tour, we'll explore the Khan el-Khalili market and the most captivating streets in the city, finishing with dinner in a traditional restaurant. 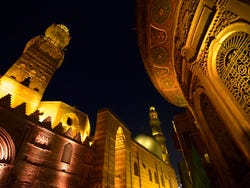 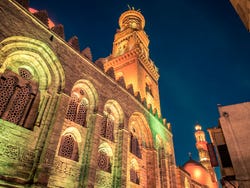 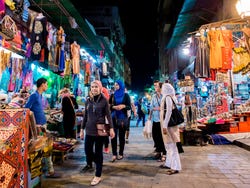 Having picked you up from your hotel, we'll make our way to the historic centre of Cairo, making a two-hour tour where we'll take in some of the most spectacular locations in Cairo. Such as the famous Al-Muizz street - known for its number of medieval architectural jewels. Or the Khan el-Khalili Grand Bazaar, Africa's largest market.

At the midpoint of the tour, we'll head to the historic  Café El Fishawi (with more than 200 years of history, it's known as the café of spies), to enjoy tea and shisha (the traditional hookah pipe popular in Egypt).

Then the tour finishes in a traditional restaurant, where you can try typical Egyptian gastronomy. Dinner is comprised of a variety of salads, meat, rice, vegetables, and desserts.

Having eaten, we'll take you back to the hotel, arriving around midnight.

Tea or Coffee and shisha in a historic café.

Dinner in a traditional restaurant.

I would like to thank Dunas Travel and Karim for the Cairo by Night Tour. I accidentally booked on a Spanish website. I do not speak Spanish at all, but Karim went out of his way to accommodate me. He did a great job. It was a spectacular tour and I had the best time. It was a great experience to see Cairo at night. The bazaar was such an amazing place and had the best vibe. The dinner was lovely and the view of the Pyramids from the rooftop while having coffee and sisha was really fantastic.

Perfect for seeing Cairo life at night. None to receive information about the places from the guide (with the streets full of people and vehicles that want to run you over, it is impossible to follow their explanations). Dinner in a restaurant located in a privileged place on the banks of the Nile, very good. Opinion translated. Show original.

The activity is a good option to go out at night in Cairo and feel safe. Dinner was very good. I wish the market had time to buy. Opinion translated. Show original.

I travelled with friends
8

We have loved walking around Cairo at night with our guide Aiman. I highly recommend that tour to end a visit to Cairo. Opinion translated. Show original.

I travelled with friends
Show all the reviews
like