On this excursion we'll leave Luxor behind, making our way to Abydos and Dendera, two cities on the banks of the Nile where fascinating temples can be found. 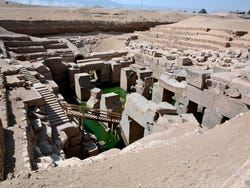 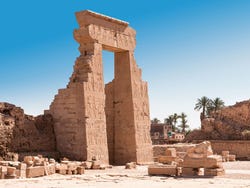 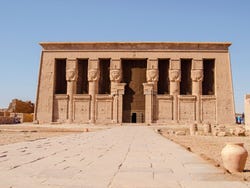 Having picked you up at your hotel or boat, we'll leave Luxor behind, making our way to Abydos, a city found 260 km northeast of the city.

In Abydos we'll see its famous temple, constructed by Set I in honour of Osiris. In this temple, you can't only find important scenes from the life of Set I and Ramses II, but also the famous Royal Lists, with the names of the 77 kings of Egypt from Menes to Set I himself.

Abydos was the most important religious centre and site of pilgrimage in Egypt. Here can be found representations of the "Mysteries of Osiris" a ceremony which reproduced the death and resurrection of the God Osiris.

We'll then have a picnic lunch, after which we'll make our way to Dendera.

The Dendera Temple is dedicated to the goddess Hathor and its construction, beginning in the reign of Nectanebo I, continued into the Roman period. The temple has two decorated crypts, two halls with ceilings supported by columns and two funeral chapels, from where the famous "zodiac" from the Louvre comes.

Having made one last stop at the Temple of Isis, we'll leave Dendera behind to bead back to Luxor, leaving you back at your lodgings between 5 and 6 pm.

* The price varies based on the chosen date

6% discount on the official ticket price.

US$ 93.90
US$ 88
No hidden fees or surcharges
Free cancellation up to 48 hours before the service starts
Book

Picked up at 6:30AM, arrived back at 5:30PM. Mohd was a fantastic guide and I spent 2 hours at each temple. I bought my own food (from hotel) but drinks were provided on return trip back. Great experience overall, both temples were fantastic and worth seeing, I highly recommend this tour. Everything was included, so nothing out of pocket. You will receive calls from both the agency and guide to finalize the tour details once booked.

Tour Guide was really friendly and had deep knowledge of the sightseeings. In addition, we had personal issues in the morning and delayed a bit, which he comprehend and waited. No need to ask for wearing mask also, respected during all the tour.

The guide Mohamed Hashem was very knowledgeable, its impressive he’s got a degree in history and can read heroglyphs. He explained not only about the temples but the history of Egypt overall. The temples are great and well preserved, worth the ride. The car was clean (clearly washed prior to my trip), and the AC was working full blast. They picked me up at 5:30am and dropped me off at around 4:00pm. No lunch was included due to covid issues about cleanliness, so we stopped at a supermarket

Really good guide and interesting explanation. I read many comments from unsuitable guides. But mine was really competent! Thanks Opinion translated. Show original.

8.30 / 10 358 reviews
A trip to Egypt would not be complete without a cruise on the Nile, an experience sure to stay with you forever. Here we'll visit the most important temples in the country.
US$ 318.30
Book
like

8 / 10 2 reviews
​Embark on a journey to the past sure to leave you gobsmacked, with this light and show sound, projected onto the Karnak temple.
US$ 44.60
Book
like

8 / 10 14 reviews
Float over the thousand-year-old Luxor temples as the sun rises, allowing you to get a bird's eye view of these majestic remains of the time of the pharaohs.
US$ 110.40
Book