Ramses II left behind one of Egypt's great monumental complexes for posterity: the temples of Abu Simbel. Decode their secrets on this excursion. 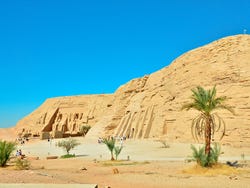 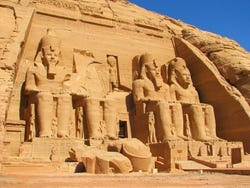 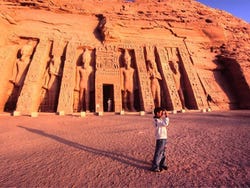 We'll pick you up at your hotel to make our way to the Cairo Airport, where we'll take a flight to Abu Simbel, found in the South of Egypt.

The second we touch solid ground, we'll head to the architectural area to make a guided tour of the Abu Simbel temples. Ramses II, known as the 'builder pharaoh' ordered the construction of enormous monuments in this area of Nubia as a testament to his hegemony. The construction of the Aswan dam in 1960 endangered these temples known as UNESCO World Heritage Sites, but they were moved, ensuring they would live on forever.

Having won the battle of Qadesh against his Anatolian enemies, Ramses II wanted to amaze his subjects with a great temple dedicated to the Gods. We'll learn about the mysteries which surround this enigmatic place, entering through the main door, where two enormous sculptures of Ramses II himself will receive us.

We'll also visit the Smaller Temple, dedicated to  Nefertari, the favourite wife of Ramses II. The facade of the building is truly stunning, and here you can put your knowledge of Hieroglyphs to the test, deciphering some of the text carved into the rock. Then we'll head inside, continuing to solve the enigmas which the fascinating world of ancient Egypt always hides.

With the visit to the archaeological site over, we'll head to the nearby Abu Simbel airport, just 20 minutes away from the temples. From there we land in  Cairo and will take you back to your hotel.

The flight may be direct, or could stop in Aswan. This will be told to the passengers when arriving to the airport.

Tours or activities will not consist of more than 15 people per group.

Return transport to and from Cairo Airport.

Transport between Abu Simbel Aiport and the temples.

You can book up until 7 days before the activity as long as there are still places. Book now to guarantee your spot.

Non refundable. You may not cancel this activity.

8.40 / 10 91 reviews
This package takes in the Great Pyramid of Giza, the Philae Temple, the Edfu Temple, Cruising on the Nile and relaxing on the shores of the Red Sea.
US$ 1,110
Book
like