One of the most unusual temples of Ancient Egypt, Kom Ombo was mainly built during the Ptolemaic Dynasty from 180 - 47 BCE, although there is evidence that it is stood upon an earlier temple.

The temple is unique for its dedication to two different deities: the local crocodile-headed god Sobek, and the first "god of the Kingdom", the falcon-headed god Horus the Elder (also called Haroeris). This double dedication was deliberate. Not only is it architecturally duplicated, with two sets of courts, hypostyle halls and sanctuaries, the twin temple is symbolic of the local and universalist themes that the two different deities represented.

While much of Kom Ombo temple has been destroyed over the millennia, it has been reconstructed in part, and it is still home to a number of well-preserved and fascinating reliefs, including some intricately carved columns and friezes divided between the two gods. The layout of the complex - apart from being a double temple - is similar to that of the Temple of Edfu.

Until very recently, the River Nile was infested with crocodiles of which the Ancient Egyptians were naturally scared. However, there was an ancient belief that if they worshipped the animal, it wouldn't attack them, and at Kom Ombo there was also a small pool in which the reptiles were raised. One of the highlights of the visit to this temple is the Crocodile Museum, where some of the many hundreds of mummified crocodiles found in the area are exhibited along with intriguing explanations.

If you're exploring Egypt on a cruise trip, the Temple of Kom Ombo is usually the first stop after leaving Aswan. Trains stop at Kom Ombo on the line between Aswan and Luxor (which goes on to Cairo too), although are very often delayed. Hiring a car with a driver from Aswan is the most flexible option, if you can haggle them down to a good price for a return journey and waiting for you while you explore the temple.

The easiest option is booking a guided excursion or cruise, many of which combine other important temples and monuments, so that you don't have to worry about travelling between the different sights or trying to find an English-speaking guide:

Or alternatively, if you're looking to just see the temple you could try: 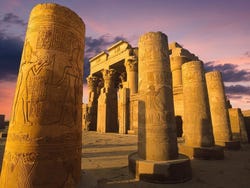 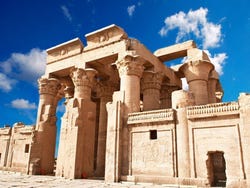 Includes entrance to the Crocodile Museum.

Hire a car with a driver for around LE 200 from Aswan (around one hour each way).